China has recently emerged as one of the world's top tourist destinations.  It is now easy for tourists to obtain a Chinese visa and travel independently in China.  Thanks to English language signage in modern subway systems, it is not difficult getting around in the major cities.

The city of Shanghai is China's "Big Apple". It is home to many large international corporations and some of the most impressive contemporary architecture in the world.

The financial district of Shanghai is located east of the river in Pudong.  Visitors can take the Meglev (Magnetic Levitation) train from Pudong Airport to Shanghai and experience train travel at 431 km per hour!

Beijing is the capital city of China.  Top tourist attractions there include Tiananmen Square, the Great Hall of the People and the Forbidden City.  Coach tours operate daily from many Beijing Hotels to the Great Wall, which runs just north of the capital. 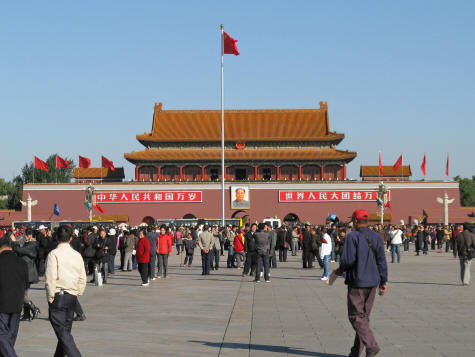 Tiananmen Square and Gateway to the Forbidden City
Tweet

The former British colony of Hong Kong is now a Special Administrative Region (SAR) within China.  It remains the exciting, cosmopolitan city that it has been for years.

Macau, which formerly was a Portuguese colony, is also a Special Administration Region (SAR) of China. It is now the world's top gambling destination.  Revenues from gambling have surpassed that of Las Vegas!

Travelflicks is pleased to present a number of free travel guides on China.  Please select a city from the menu.